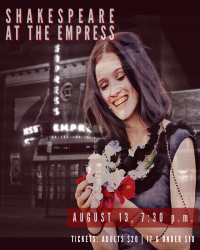 The Lethbridge Shakespeare Performance Society returns to the Empress Theatre, this time with their version of Hamlet. Set in Denmark, the play depicts Prince Hamlet and his revenge against his uncle, Claudius, who has murdered Hamlet's father in order to seize his throne and marry Hamlet's mother. Hamlet is considered among the most powerful and influential works of world literature, with a story capable of seemingly endless retelling and adaptation by others. It was one of Shakespeare's most popular works during his lifetime and still ranks among his most performed to date.