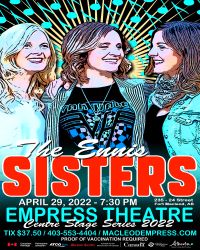 Tickets $37.50 - PROOF OF VACCINATION ONLY FOR ENTRANCE TO THEATRE

The Ennis Sisters, Maureen, Karen, and Teresa, started playing music at a young age, encouraged by their father John and their mother Ceilie. The trio released their first album, Red is the Rose, on June 25, 1997. By the end of the year, the album was named Best Folk Album by the Music Industry Association of Newfoundland & Labrador. Known for their amazing sibling harmonies, the Ennis Sisters will be touring in Alberta to promote their latest recording KEEPING TIME.