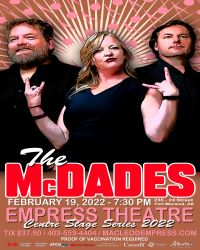 PROOF OF VACCINATION ONLY FOR ENTRANCE TO THEATRE

Juno award-winning band, The McDades, are excited to announce the release of their third album, “The Empress”. In the tarot, The Empress is the third card; she represents the productivity of the subconscious and often brings strong bursts of creative and artistic energy. When deciding on a title for the album, they were drawn to the concept of the Empress and also to the symbolism of the number 3, both having ties to creativity, growth, new ideas and expression.

The McDades’ are known for stretching the boundaries of traditional music, being celtic-rooted, but with much wider inspiration that is full of side trips and improvisations. As a group they love the experimentation and exploration of new ideas and arrangements; the freedom to express ourselves within an art form, but without constraints. The Empress, though celtic at heart, has splashes of classical, jazz, bluegrass, Indian classical music, and rock. The original tunes, traditional songs and 3 covers on the album showcase The McDades’ love of exploration and like the number three and The Empress herself, invoke their pure joy of creativity.