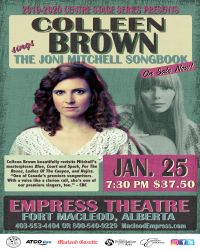 × Tickets $37.50 Colleen Brown and her band have been winning over audiences nationwide with her groove-filled and melodically mature pop-influenced songs that have enjoyed high rotation on both CBC 2 and CKUA Radio Network. She is a musical chameleon who is at home behind both her piano and guitar. Joni Mitchell remains one of Brown’s biggest influences but Brown is not attempting to impersonate Mitchell. This is not a tribute act. Brown is simply one of few artists can interpret Mitchell’s vast body of work with such intensity and confidence.