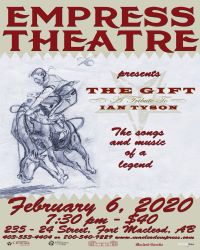 The Gift: Tribute to Ian Tyson

× Tickets $40 Edmonton singer-songwriter Stewart MacDougall is imminently qualified to spearhead a musical tribute to a foothills music legend. In the past MacDougall has written, toured and recorded with celebrated country star Ian Tyson who has written such iconic songs as “Four Strong Winds” and “Someday Soon”. The piano player and vocalist is a driving force behind The Gift: A Tribute to Ian Tyson coming to the Empress Theatre February 06, 2020. Along with MacDougall will be drummer Thom Moon and fiddle player/vocalist Myran Szott. Like MacDougall both performers were part of Tyson’s band earlier in their music careers. “The poetry in Ian’s songs is great,” he said. “I never get tired of singing these songs. Tyson remains a legend to many in the music community for continuing to pen songs even now, in the early part of his eighties. Also part of the band for The Gift show